Despite the challenges of 2020, Elder’s Mansfield Budget Blinds location has experienced an 80% increase in year-over-year sales and entered the Million Dollar Club.

Growing up in a working class family of eight siblings, Joseph Elder says he learned the value of hard work long before deciding to start his own business with Budget Blinds, the custom window covering franchise with over 1,300 locations throughout the U.S., Canada and Mexico.

The Journey to Budget Blinds

From a young age, Elder started offering asphalt maintenance and parking lot repair in his hometown of Waco, Texas — experience he says would later become invaluable when he decided to franchise with Budget Blinds.

“I was first introduced to Budget Blinds through working for Kevin and Kim Garman at their Waco, Texas location,” said Elder. “I quickly became their lead installer and really fell in love with the Budget Blinds brand concept.”

After working in Waco as their lead installer for over a year, Elder’s wife Raquel finished her radiology degree, and the duo moved to the Dallas-Fort Worth area for her career. Elder started working for a Budget Blinds franchise in the area and after about four months, the owner mentioned she was looking to sell her other franchise location in Mansfield, Texas.

“It was overwhelming at first since we had just moved to the area, but the owner needed to sell the franchise, and I knew it was an opportunity I didn’t want to miss,” said Elder. “We didn’t have a way to get the money in a traditional sense, so we went to her and told her we wanted to purchase the franchise, but she’d have to finance us so we could pay her as we made money with the business. We went to her with that proposal, and she said yes. I knew after seeing the Waco location’s success that it would work. Two years and two months later, we took her to the rooftop of the Riata Inn and paid off the last check.”

Elder says Kevin and Kim were really the mentors that encouraged him to get started; they believed so much in Budget Blinds and believed in Elder as a business owner. “When you have a system that works as well as Budget Blinds, franchisees are confident in investing in other franchisees and recommending new business owners,” he said. “The Garmans played a huge role in giving us the confidence to not only purchase the franchise, but also be successful. It really speaks to the Budget Blind family and how close everyone is in the system. We officially became Budget Blinds franchise owners in 2012.”

When it comes to what appealed to Elder about the Budget Blinds franchise opportunity, he says he always knew he wanted to own his own business and knew the franchise model was a great way to jump start that process.

“The hardest part of succeeding in the window covering industry is getting started and standing out from the competition,” said Elder. “Budget Blinds already has the proven branding, vendor partnerships and support in place. I knew that the corporate team would provide all of the tools needed to strategically make a successful window covering company. The corporate team wants us to succeed as much as they want the brand to succeed. The harder you work, the more successful you’ll be.”

Cut to eight years later, in 2020, when Elder and his wife went to a Budget Blinds convention in Colorado. For the previous three years, they had been hitting the half-a-million mark in yearly sales, but Elder knew he had the potential to do better. During the convention, Elder saw firsthand the lucrative infrastructure that he had at his disposal, and he knew it was time to reach that coveted million dollar mark in yearly sales.

“We sat down in the very beginning of 2020 and looked at how we could best implement the Budget Blinds business model to become a part of the Million Dollar Club, a group of locations that generate one million in yearly revenue” said Elder. “We wanted to take those Budget Blinds principles and strategically lay out a plan to achieve our business dreams. We knew it was possible based on other successful Budget Blinds franchisees. We made a plan for hiring a team, got a line of credit from the bank and laid out a 12 month plan. Then, the pandemic happened.”

Still, Elder persevered. “When the pandemic hit, Joseph and Raquel didn’t let it shake them for more than a day or two,” said Aaron Cady, director of franchise licensing for Budget Blinds' parent company Home Franchise Concepts. “They stuck with the plan, hired more people, bought more vans, opened a nicer office/showroom and did more effective marketing, customer service and follow-up for referrals. The results were truly amazing.”

After a few weeks, the Elders started to see sales jump higher and higher as more people stayed at home and decided to tackle home renovation projects. With their strategic plan in place, the business took off like a rocket.

“Half way through 2020, we were officially in the Million Dollar Club, and had doubled our sales from the previous year,” said Elder. “The pandemic has hit different industries in different ways, but our business was well-positioned because of the proven franchise model, our strategic plan and a growing consumer demand.”

Why Budget Blinds is Excited for the Future

Despite the pandemic, Budget Blinds celebrated a record year in terms of business growth, seeing 100 franchise territory exchanges and inching toward an impressive 1,300 territory milestone.

Elder says that his Texas location has also helped him succeed during these challenging times. “In general, Mansfield is a little town on the edge of Dallas, so a lot of people who are looking to leave the big city life and come to the suburbs are choosing to build their dream homes here,” he said. “In the last three years, there have been over 1,000 homes built and it is one of the fastest growing areas in Texas. That has been a huge bonus — everyone needs window covering when they are building new construction, which positions Budget Blinds owners for success as the real estate industry booms all over the country due to COVID-19.”

Looking ahead, Elder hopes to grow with the company and recently purchased a second territory in December. One month into 2021, his Manfield location has already hit $100,000 in sales during a time that is traditionally slow. Elder says he is most proud of being able to hire a full-time team and support his community. He loves seeing his vans driving around town and knowing his staff is busy. One of his employees recently bought a house, and Elder says that is what it is all about.

If you’re ready to be your own boss and reap the rewards of being a small business owner, then now’s the time to get more information. 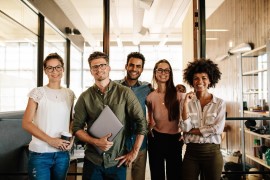 Millennials are achievement-oriented and ambitious, which make them great candidates to run a franchise. Here are other traits that help them succeed in franchising.

IS A HOME SERVICES FRANCHISE A GREAT FIT FOR YOU?

Considering a home services franchise but not sure if it’s the right fit for you? Here are some things to consider so you can make the best investment.